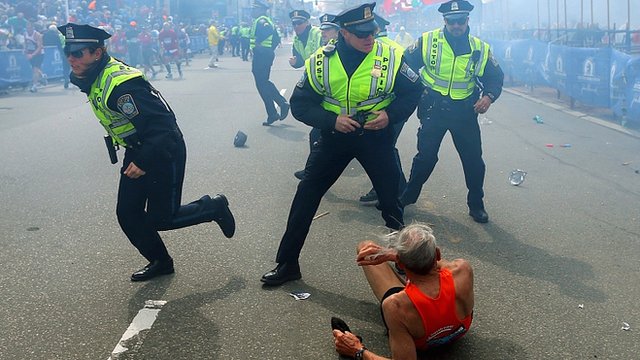 During the last week, daily news of the Boston Marathon bombings and its aftermath has generated fear and a frenzy of analysis. Even though the scale and context is very different immediate references to September 11 2001 proliferated. One witness told the BBC it felt “like new York all over again” another witness described the aftermath to USA Today as “like a scene from 9/11”.

September 11 has become an archetype for contemporary apocalypse and concepts from apocalyptic studies can help us make sense of some of the news and the way it is being processed.

The apocalyptic is a world view found in all religions but in the West one which draws its ideas from the opaque last book of the bible: The Book Of Revelation. This book predicts the end of the world in a series of cryptic visions of wars, plagues, disasters, multi headed beasts and cruel torture that ultimately ushers in a new millennium – a thousand year reign of peace. When disaster strikes apocalyptic thinking creeps in. It has become a deeply embedded Western template for constructing contemporary events. In the words of feminist theologian Catherine Keller many groups from politicians to the news media are in the grip of an “apocalypse habit”.

Rhetorical use of calamity

Scholars have long argued that catastrophic events seed development of apocalyptic fervour. They have looked to the prevalence of social or natural catastrophic events or psychological dissatisfaction among apocalyptic groups to explain how a prevailing anomie or break down of social meaning interacts with a compelling event to produce an apocalyptic mindset. However in arguing for a rhetorical view of the apocalypse Stephen O’Leary argues that sociological or psychological explanations are not complete explanations of either specific or general outbreaks of apocalyptic fervour. He suggests that the persuasive force of apocalyptic argument is often the key facilitating factor:

“Even if we allow that events such as earthquakes, wars, and depressions are experienced as disasters by virtually everyone, not every event of this kind is accompanied by an increase in apocalyptic conversion. Some occurrences, on the other hand, are viewed as disasters because a rhetor succeeds in persuading an audience with this definition; and only rhetoric can turn any disaster, real or perceived, into a sign of the imminent end…The issue is not whether audiences are predisposed by such experiences to accept apocalyptic arguments, but how apocalypse contextualizes disasters as a ”rhetorical use of calamity.”

Although large sections of the media have quickly claimed this as an apocalyptic event screaming headlines of Terror, what has been notable in the response to the Boston Bombings is the restraint with which President Obama has framed the bombings: pleading with Americans to avoid a rush to judgment. Obama did engage with a “rhetorical use of calamity” but he chose to focus on the millennial – hopeful – aspects of the apocalyptic drama not the cataclysmic. He used the catastrophic events to assert that in the response to disaster Americans have “seen the character of our country once more.” In this way he reclaimed the apocalyptic as “revelation” of hope rather than calamity. This is in sharp contrast to President Bush’s post September 11 rhetoric of “an axis of evil” and an apocalyptic delineation of enemies: if you are not with us you are against us.

Because the apocalyptic tradition emerges out of a series of cryptic visionary texts a key mark of the “apocalypse habit” is scouring “the signs of the times,” for “wars and rumours of wars” (Matt 26:6) that might confirm the pattern of the end times.

Richard Landes says that for those “who enter apocalyptic time everything quickens” and they become “semiotically aroused”, they seek patterns and meaning in both big and small events. Christopher Partridge calls this tendency to latch onto news and other events and view them through the apocalyptic frame: “semiotic promiscuity”. Albert Baumgarten argues that apocalyptic movements deploy what he terms a “spiritual radar” in this process:

“A spiritual radar goes on to seek confirmation of the millennial message in a variety of contexts, including events of the age, both good and bad (sometimes even good and bad at the very same time), chronological reckonings of different sorts and Biblical interpretation. This search proceeds by triangulation: as many different independent lines of argument as possible are developed to confirm the conclusion that the end is in fact near.”

As Jesse Walker has pointed out this mentality has clearly been on view in the media in the last week. Immediately after the bombings commentators were seeking clues: did this mesh with Al-Qaeda’s tactics, did the date – Patriot’s Day – indicate a homegrown right wing plot. The scanning of CCTV footage and other digital images by both the FBI and ameuter sleuths and the foraging on suspects social networking sites became a particularly contemporary versions of this apocalyptic “semiotic arousal”. But as one moderator of the crowdsourcing site Reddit acknowledged the frantic search for signs and tips can lead to “witch hunts” such as the targeting of missing Brown University student Sunil Tripathi.

Michael Barkun points out that many of the contemporary millennial or apocalyptic groups do not fit the standard typology of either religious or secular. Some movements engage in what he calls “improvisational millennialism:” they draw from a variety of disparate sources such as Revelation, Nostradamus, “New Age” spirituality and right wing politics.

“The appeal of these collages lies in their claim to provide holistic and comprehensive pictures of the world. The variety of their elements implies that the belief system can explain a comparably wide range of phenomena, from spiritual to the scientific and the political. The combinations also suggest that apparent contradictions can be resolved, and that an underlying unity transcends outward differences.”

The emerging picture of Tsarnaev brothers does not suggest a clear ideological picture. Yes there are extremist videos on Tamerlan’s YouTube channel, but there is rap, Breaking Bad and Game of Thrones on Dzhokhar’s Twitter account. The New York Times says they had feet in two worlds but the reality is like most contemporary multimedia literate youth their feet, their eyes and their hearts were dancing fast across many screens, drawn into many worlds.

It is very likely that they were improvising anger – drawing signs from many sources and a range of ideologies – just as we have been trying to improvise hope and meaning as we confront disaster and tragedy. This does not make either their anger or our hope any less real or troubling.