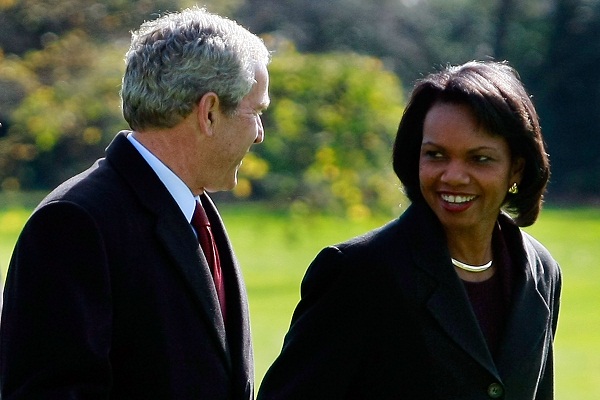 Media Matters has a great analysis of the Katie and Condi show that aired recently on US 60 Minutes. The interview was pure Couric and pure 60 Minutes and represents what is best and worst about both those brands. Couric sits with that intense look that somehow manages to convey admiration and slight approbation at the same time but doesn’t convey the import of either emotion. She asks how you ask the Secretary of State out on a date (Rice: “I’m not going to go there”) and uses a quote from her daughter “Who made us the boss of them” as a question about American intervention in the Middle East. There are moments when she pulls Rice up: “But that’s not the question…” but she basically gives her a free ride and doesn’t challenge her on any substantive point. Significantly for Couric who’s move to CBS was wrapped up in the rhetoric of wanting to do serious journalism she never comes back at Rice or argues a a single question based on research.

But the show does what it sets out to do brilliantly, it produces a powerful piece of television which appears to grant the viewer unique and intimate access to the most powerful women in America. And just as the segment title proclaims, Rice is a “True Believer”. This is the myth of Rice that we see played out again and again. The girl who rose from Bombingham and emerged with determination and ambition. The loyalist who selflessly serves her president. The woman of conviction who wants to change the world. This is summed up in a little set piece Rice delivers early in the interview:

“I probably have at one level, a better understanding, or perhaps, let me say a more personal understanding of what the dark side of human beings can look like. I remember very well in 1963 when Birmingham was so violent. When it acquired the name ”Bomb-ingham. That even with my wonderfully protective family, you had to wonder why are they doing this to us? And on the other hand, I have a great faith in the ability of people to triumph over the dark side of human beings.“

She also uses her experience growing up in the pre-civil rights south to great effect to counter criticisms of the Bush administration’s push to ”spread democracy“ in the Middle East:

”And so when I look around the world and I hear people say, ‘Well, you know, they’re just not ready for democracy,’ it really does resonate. I hear echoes of, well, you know, blacks are kind of childlike. They really can’t handle the vote. Or they really can’t take care of themselves. It really does roil me. It makes me so angry because I think there are those echoes of what people once thought about black Americans.“

Many profiles of Rice draw comparisons between her and the President: sport, faith, fitness and steely conviction. As Nicholas Leeman once wrote: ”When you hear Rice speaking, that is what Bush would sound like if he was as articulate as she was.“

Rice and Bush are an intermingled myth she is always by his side, always whispering in his ear. Of all his advisers Rice is the one that is most visibly by the side of the decider. There has been speculation about the extent or power of her actual influence at different points but her most powerful role of being the other Bush – the same but different – has not changed. It can’t change without fundamentally altering the whole script: she’s a true believer.