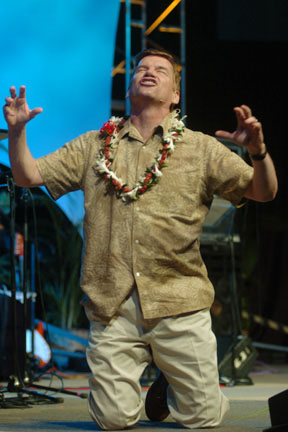 Rev Ted Haggard down on his knees

It’s fascinating to watch yet another Evangelical/Republican homo-sex scandal erupt. After Rep Mark Foley was introduced to the world by a White House page, Rev Ted Haggard hits the media courtesy of a Denver prostitute called Mike Jones. Not only did the (now former) president of the National Association of Evangelicals pay Jones for sex he also bought crystal from him.

As delicious as it is as a scandal, it is also a fascinating media story and an even more fascinating religion story.

As Colorado Springs gay news site Gazette reports, the story has been brewing for some time and is a great example of the new press rules on how and when a scandal becomes public. NBC Denver affiliate KUSA had been investigating Jones’ claims for two months but say they couldn’t find corroborating evidence. But when Jones went on talkback radio and claimed to have been paid for sex by “one of the biggest religious guys in the country” KUSA decided that they could do an accusation/rebutal story if Haggard agreed to speak to them.

“It became public and we decided we would do the story if Pastor Haggard responded to it, and he did. We presented it as such: There’s an allegation, and there’s a response,” KUSA’s assistant news director told Gazette.

Interesting example of how the journalistic rules suddenly change when a media organisation suddenly thinks it might be scooped, on what is obviously going to become a pretty dynamic story. It’s a classic example of “strategic objectivity” being abandoned because it was no longer strategic. It’s also a story about elections. Jones says he wanted it out before next weeks elections because Haggard had been playing such a key role in the Colorado marriage amendment.

The rules of the PR game are also in effect. At first Haggard denied the claims. Then he stood down from his church position while an independent investigation took place. But after that an incremental series of admissions have leaked from the pastor himself, culminating in the strange: I only contacted Jones to buy drugs and a massage not to have sex, yeh I did buy the drugs but I didn’t use them and ah the massage no, there were no happy endings – sorry we are all tempted. Positively Clintonesque: I did not have sexual intercourse with that man nor did I inhale. As Josh Holland on Alternet sarcastically comments:

The sad thing is that Haggard’s followers will probably buy all that. After all, they throw millions of dollars at these “spiritual leaders” who are transparent con-men of the worst sort. They support Republicans who pay them lip service but ignore them until the next election rolls around. ‘It’s all political,’ they’re saying to themselves now — part of the Grand Liberal Conspiracy® to tear down people of faith.

Probably the most interesting reflection on the whole saga comes from Jeff Sharlet who did a long profile on Haggard for Harpers last year. He writes: “The downfall of Ted Haggard is not just another tale of hypocrisy, it’s a parable of the paradoxes at the heart of American fundamentalism.” He also admits to missing that the first time around:

I wrote about the role of sex in Ted’s theology, but removed it from the final edit of the story (some of it I refashioned into a short essay on Christian Right’s men’s sex books for Nerve). I made the mistake of viewing Ted’s sex and his religion of free market economics as separate spheres. The truth, I suspect, is that they’re intimately bound in a worldview of “order,” one to which it turns out even Ted cannot conform.

In the Nerve article Sharlet notes how “the gay man” as archetype fills the role of the “harlot” of old as the new seductress:

It is no longer acceptable to speak of loose women and harlots, since sexual promiscuity in a woman is the fault of the man who has failed to exercise his “headship” over her. It is his effeminacy, not hers, that is to blame. And who lures him into this spiritual castration? The gay man.

Christian conservatives loathe all forms of homo- and bisexuality, of course, but it is the gay man (singular; he’s an archetype) who looms largest in their books and sermons and blogs and cell group meetings. Not, for the most part, as a figure of evil, but one to be almost envied. “The gay man” is the new seductress sent by Satan to tempt the men of Christendom. He takes what he wants and loves whom he will and his life, in the imagination of Christian men’s groups, is an endless succession of orgasms, interrupted only by jocular episodes of male bonhomie. The gay man promises a guilt-free existence, the garden before Eve. He is thought to exist in the purest state of “manhood,” which is boyhood, before there were girls.

And it is this state of unordered – uncoded – manhood that is such a threat, and so seductive. A seduction it appears Haggard could not resist.