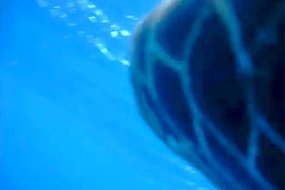 I have been loving my iPad. Many of its features make reading the web a much more intimate, easy and pleasurable experience. However none of the mainstream news organisations – except perhaps NPR, which comes close – have managed to produce a fully functional app which matches the breadth and versatility of their respective websites. The real problem however is with sharing via blogging or social media sites.

Earlier today I came across a cute little story on the Australian Broadcasting Corporation’s new app about a Turtle activating a waterproof camera and taking it for a swim. The camera was found washed up on a beach in Florida and its contents were posted on YouTube. It’s hardly a breaking news story but it is a perfect light relief “share” story and my problems getting the word out illustrate some of the frustrations with the iPad as a creative reporting tool and some of the problems with current news organisations’ decisions around how to produce news apps.

Normally the Turtle story would have been easy to share because, unlike a number of other news apps, the ABC has good Twitter integration – including auto link shortening – for sharing stories straight from the app. However, the app story has no link to the YouTube video. The ABC is not alone here all news apps have decided to forgo links within their apps, so researching connections to related content is difficult. But if I was going to tweet this, I first wanted to view the video and of course I wanted to include a link. So I had to exit the app and go into the YouTube app and search for the Turtle video. I tried a few different searches – including some written phrases from the YouTube notes quoted by ABC – which failed to turn up the video. So I exited the YouTube app and went to Safari, I tried the ABC’s normal website to see if they linked to the video in their web version of the story. Not that I could see. Safari produced a few other news versions and one of them provided a link to the video, which on the iPad opens in the YouTube app. The You Tube app has share via email but no Twitter integration. So to share a simple 140 word tweet I had to:

1. Open the story in the ABC app, press the share via Twitter, which produces an auto tweet of headline and shortened url, which I copied but didn’t send; close

3. Open YouTube app and find Turtle video; press the share via email and copy the url – as the app has no browser style url field; close

4. Back to Twitterific, open new tweet field which has kept my previous unsent version pasted from  the ABC app, add in the YouTube info and finally send.

However even after all this I had not anticipated one final problem. As I was reading and tweeting other stories, I noticed a message from @marygazze: “That turtle link just raised a huge red flag with bit.ly. Got another?” Hmm. Turns out that the ABC uses “is.gd” shortening and when I transfered it into to Twitterific the already shortened link was reshortened by bit.ly and this caused the “red flag”. I tired to check all this on my iPad but finally I got up and went into the study opened up my big browser and a set of tabs and had the whole thing fixed and retweeted in minutes.

A final interesting point is that when I looked at the normal ABC web story (not the iPad app version) on my large screen desktop I saw that they had actually included a link to the YouTube clip in the sidebar under “related stories.” I had missed this on my initial scan when I checked the normal ABC site through Safari on my iPad:  firstly I was looking for an instory link and secondly the smaller screen didn’t allow the sidebar link to jump out on a quick scan. This in itself is an interesting comment on Nick Carr’s recent thoughts on “Delinkification“. (For further comments on this see Jason Fry’s thoughts at Nieman Lab)

The Turtle story itself wasn’t really worth all the effort. The camera was found in January, so it’s really a strange story for ABC to be running six months later. But it serves as a good case study of certain trends in news delivery and my experience tweeting this story certainly serves as an interesting case study of the tweetability of iPad news. It also signals that news organisations should think harder about the nature of news in the evolving news ecology. If a news organisation is going to run a story in any format about a YouTube video they are simply not providing complete reporting without providing a link, if they can’t or wont provide a link why even bother running the story. Not providing a link demonstrates a complete misunderstanding of the nature of viral YouTube videos and web sharing which is after all at the heart of what makes this story newsworthy.

Just to complete the strange twists of this story on sharability, I can’t embed the video here because the original poster disabled YouTube’s normal embed settings. Maybe he didn’t want to infringe the Turtle’s copyright! (More likely it’s a perverse attempt to up his view rate) If you want to see it, here’s the link to YouTube.

I have lots of other thoughts on iPad news apps and usability issues which I will cover soon in another post.